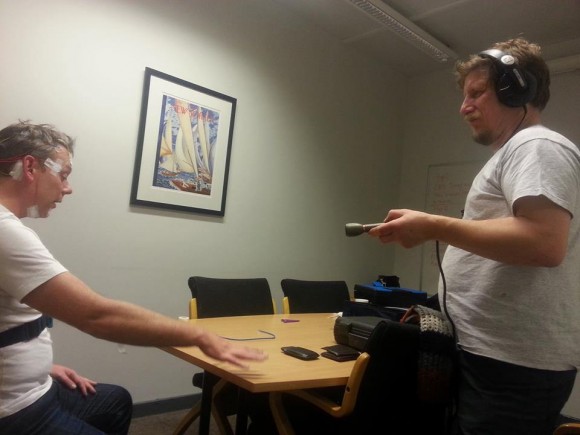 The Dream of the Dream Scientist is an oblique sound-portrait of The Northumbria Centre for Sleep Research, one of only three purposely built academic facilities dedicated to the research of sleep in the UK.  It is an unusual space – part hotel, part science lab.

Much is known about the effects of sleep deprivation on an individual but little is known about why we sleep. As such the Centre dedicates itself to three main areas of study:

Biomedical data of participants is recorded through sensors and electrodes attached to their body. These record the brain waves, eye movements, body movements, temperature and heart rate of the participant as they enter and exit the varying stages of sleep.  This broadcast asks ‘What does the Dream of the Dream scientist sound like?’

Professor Jason Ellis, Director of the Sleep Research Centre, having never undergone these tests personally offered to undergo a night of sleep recording to see how his body would respond. Taking the listener through what it means to be asleep and discussing what is happening to our bodies when we dream, biomedical data captured during the study form the basis of a series of choral pieces performed and recorded by the Noizechoir to create graphical scores. The basis of the 60 minute broadcast will consist of choral pieces performed and recorded by the Noizechoir. Interviews and audio recordings of Jason’s experience create a sound portrait of the sleep centre, exploring its aural landscape, its culture and the science that underpins it.

The Dream of the Dream Scientist

[sound file to be added]

Freelance arts and heritage practitioner; working with photographic and time based media who has delivered a number of innovative projects working in partnership with organisations such as Sunderland City Council, Northern Architecture and Washington Arts Centre. He is involved in engaging archive and museum projects for Tyne and Wear Archive and Museums where he is an outreach officer. He runs the record label Signals and a weekly show Signals from the North on BASIC FM which combines field recording, audio collage, with reportage and an alternative take on the idea of the heritage in the North of England. Working with with Noizechoir for the last two years. Noizechoir’s process is rooted in interpretive performance, working from visual scores. They sing in response to location, architecture and environment but also explore less concrete notions such as light pollution and radio landscapes.