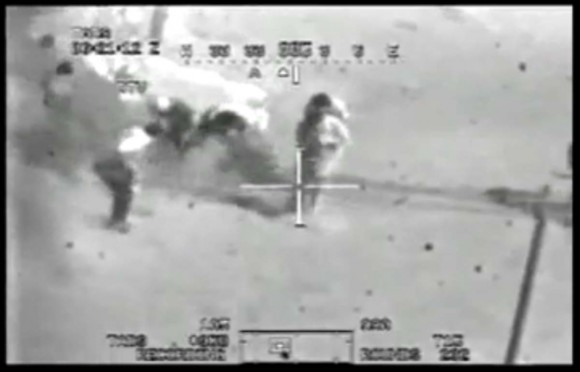 The “collateral murder” video that documents the 2007 killing of journalists and civilians in Iraq by forces of the US military represents what is possibly the most consequential social media posting of all time, with direct implications ranging from the prosecution of Bradley (Chelsea) Manning and Julian Assange, through to accelerated attempts by the NSA and other global intelligence agencies to expand and enhance internet surveillance and control, while also criminalizing whistle-blowing.

Though the visual aspect of the video has received a tremendous amount of analysis, Crazy Horse One-Eight addresses the weaponization of radiophonic space in the perpetration of these war crimes, while also confronting the casual and dismissive language of the interactions themselves, as evidenced in the transcript of the radio exchanges between helicopters and command.

The public domain transcript for the incident is composed into four “cantos”, which are then voiced by Gregory Whitehead. The recordings are then subjected to a variety of techniques and rhythms/structures of entropic disintegration, interruption and polyphonic accumulation, all of which Whitehead has experimented with a smaller scale in previous works. Brief excerpts from the audio track of the video booth construct acoustic envelopes for the vocal migrations, and create interplays between military banter that seeks to kill and a solo voice that seeks to commemorate.

Listen to an excerpt of the work

a radio cantata in memory of those killed

Aired on Resonance FM, ABC Australia, German Public Radio, Borealis Festival Bergan and Radiophrenia CCA Gallery  Glasgow. This was streamed during March 2015 on our Gallery and was part of the Radio Arts Showcase at the Beaney Gallery.

Gregory Whitehead  has created more than one hundred radio plays, essays and acoustic adventures for the BBC, Radio France, Australia’s ABC, NPR and international broadcasters. Often interweaving documentary and fictive materials into playfully unresolved narratives, Whitehead’s aesthetic is distinguished by a deep philosophical commitment to radio as a medium for poetic navigation and free association. In his voice and text-sound works, he often explores the tension between a continuous pulse and the eruption of sudden discontinuities, as well as linguistic entropy and decay. His radio plays have won numerous awards, including the Prix Italia, Prix Futura and Sony Gold Academy Awards.

“I embraced analog broadcast radio as my ideal creative home because the airwaves seemed to vibrate with the same qualities I sought to capture in my own plays, and in my own thinking: indeterminacy, fragility of signal, random access, tension between public and private, ambiguous borders, modulating rhythms, complex polyphony, and a pulse rate set by a wild heart.”